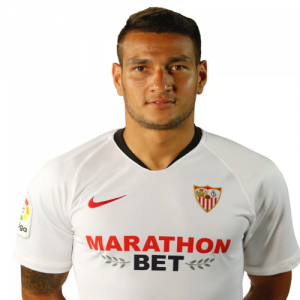 Nemanja “Neno” Gudelj (born 16 November 1991) is a Serbian professional footballer who plays as a midfielder for La Liga side Sevilla and the Serbia national team.

He is the son of former NAC player Nebojša Gudelj and the older brother of Dragiša Gudelj.

Guangzhou Evergrande Taobao
On 28 January 2018, Guangzhou Evergrande Taobao announced that Gudelj was transferred from Tianjin TEDA and signed a 2-year contract. The transfer fee was not announced. He made his debut for Guangzhou on 21 February 2018 in a 0–0 away draw against Cerezo Osaka in the second group stage match of 2018 AFC Champions League. On 14 March, he scored his first goal for the club in the fourth group stage match of the AFC Champions League against Jeju United, which ensured Guangzhou Evergrande’s 2–0 away win. Gudelj was excluded from first team squad in July 2018 due to the limitation of the number of foreign players.

Sporting CP (loan)
On 23 August 2018, Gudelj was loaned to Primeira Liga side Sporting CP for the 2018–19 season. The contract at will extend for four years as a Sporting CP player. The actual loan contract expires in the end of the season so he would move as a free player .