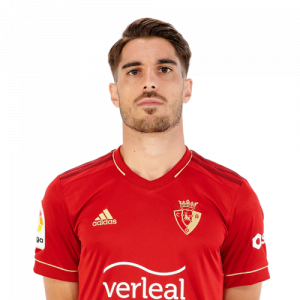 Ignacio “Nacho” Vidal Miralles (born 24 January 1995) is a Spanish professional footballer who plays for CA Osasuna as a right back.

Valencia
Born in El Campello, Alicante, Valencian Community, Vidal joined Valencia CF’s youth academy in 2009 from Hércules CF. He made his debut as a senior with the reserves on 23 March 2014, coming on as a second-half substitute for José Luis Gayà in a 0–2 away loss to Levante UD B for the Segunda División B.

Vidal scored his first senior goal on 14 January 2017, his team’s second in a 2–1 home win over RCD Espanyol B. He featured in 42 matches during the season, as his team missed out on promotion in the play-offs; on 4 May, he renewed his contract until 2020.

On 18 August 2017, Vidal made his first-team – and La Liga – debut, starting in a 1–0 home win against UD Las Palmas. He scored his first goal in the competition on 24 September, helping beat hosts Real Sociedad 3–2.

Osasuna
On 13 July 2018, Vidal signed a four-year deal with Segunda División club CA Osasuna, with Valencia retaining 50% of his federative rights. He played 38 games in his debut campaign, adding five assists in a return to the top tier as champions.