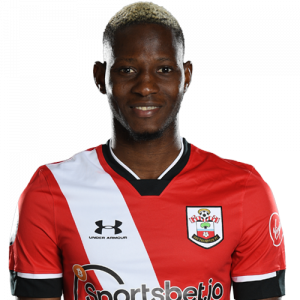 Moussa Djenepo (born 15 June 1998) is a Malian professional footballer who plays as a winger for Premier League club Southampton and the Mali national team.

Standard Liège
On 31 January 2017, Djenepo joined Standard Liège on loan, with an option to buy. The club activated his buyout clause on 30 May 2017, hence making the transfer move permanent. He made his professional debut with Standard Liège in a 4–0 loss in the Belgian First Division A to Club Brugge on 27 August 2017. Djenepo netted his first goal on 11 March 2018, in a 3–2 away victory against Oostende at Versluys Arena.

On 17 March 2018, Djenepo played when he came on as a substitute for Mehdi Carcela, as Standard Liège beat Genk 1–0 after extra time to win the 2018 Belgian Cup Final and qualify for the UEFA Europa League.

Southampton
On 13 June 2019, Djenepo signed a four-year contract with Premier League club Southampton for a reported fee of £14 million. He scored his first goal for the Saints on 24 August 2019, in a 2–0 win over Brighton & Hove Albion. Djenepo scored his second goal for the club in a 1–0 victory against Sheffield United, which was voted as goal of the month in September 2019. On 7 March 2020, Djenepo was given a red card against Newcastle after Graham Scott checked the pitchside monitor.

Djenepo scored his first goal of the 2020–21 season in a 2–0 win over West Bromwich Albion.

International career
Djenepo is a youth international for the Mali under-20 team, appearing in the 2017 Africa U-20 Cup of Nations.

Djenepo received his first call-up to the senior team on 3 October 2017.[21] He made his debut on 6 October, in a goalless 2018 FIFA World Cup qualification match with Ivory Coast. On 23 March 2019, Djenepo scored against South Sudan in a 2019 Africa Cup of Nations qualification home fixture, which ended in a 3–0 victory.