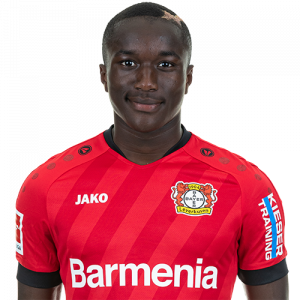 Moussa Diaby (born 7 July 1999) is a French professional footballer who plays as a winger for Bundesliga club Bayer Leverkusen.

Loan to Crotone
Diaby was loaned to F.C. Crotone for the second-half of the 2017–18 Serie A season. He made his professional debut on 14 April 2018 in a Serie A match against Genoa. He replaced Marcello Trotta after 84 minutes in a 1–0 away loss. He would make one further first team appearance for Crotone in their 1–1 draw against eventual champions Juventus on 18 April.

Return to PSG
On 14 September 2018, Diaby, who replaced Lassana Diarra at halftime, scored for PSG in the 86th minute in a 4–0 win over AS Saint-Étienne. Diaby became the 124th academy graduate to feature for the senior side.

He went on to make 25 Ligue 1 appearances in 2018–19, scoring four times across all competitions and averaging an assist every 190 minutes during the club’s successful title defence.

Bayer Leverkusen
On 14 June 2019, it was announced that Diaby would join Bayer Leverkusen on a five-year deal. Diaby scored his first Bundesliga goal for Leverkusen in his first competitive start on 23 November 2019 in the club’s 1–1 draw with SC Freiburg.

Diaby scored Leverkusen’s third goal in stoppage time to seal a win over 1. FC Union Berlin in the quarter-finals of the DFB-Pokal on 4 March 2020. In the next round, on 9 June 2020, Diaby scored the first goal in Leverkusen’s 3–0 victory over fourth division 1. FC Saarbrücken to secure a spot in the 2020 DFB-Pokal Final.