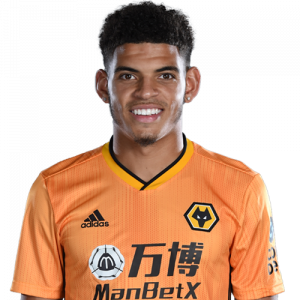 Morgan Anthony Gibbs-White (born 27 January 2000) is an English professional footballer who plays as a midfielder for Premier League club Wolverhampton Wanderers. He has represented England at under-16 through under-21 level.

Gibbs-White joined Wolverhampton Wanderers aged 8 and has played for the club’s academy at all age groups. He made his first team debut, aged 16, as a 62nd-minute substitute for Joe Mason in a 2–0 win over Premier League side Stoke City in the FA Cup 3rd round on 7 January 2017. He made his first league appearance on 14 February 2017 in a 1–0 home defeat in the EFL Championship against Wigan Athletic.

In January 2018, it was announced that Gibbs-White had signed a contract that would keep him at the club until summer 2022. He made his first Premier League appearance in the opening home match of the 2018–19 season against Everton as a late substitute. He also came on as a substitute in the home match against Tottenham Hotspur on 4 November 2018; despite the team losing 3–2, his performance received particular praise.

The midfielder got his first start in the Premier League in the home game against Chelsea on 5 December 2018, in which he provided the assist for Wolves’ first goal by Raúl Jiménez in a 2–1 win. On 15 August 2019 he scored his first goal for Wolves, on his 57th senior appearance for the club, in a 4–0 second leg win against the Armenia team FC Pyunik in a Europa League qualifier.

During the COVID-19 pandemic, Gibbs-White was disciplined by Wolves for having breached government rules by attending a party in London in May 2020.

On 25 August 2020 he signed a new three-year contract with Wolves before moving on loan to Championship side Swansea City for the 2020–21 season. He scored his first goal for Swansea in a 1–0 win against Preston North End on 12 September 2020. Gibbs-White fractured his foot in Swansea’s home game against Millwall on 3 October 2020, leading to him missing three months of the season. He did not make another appearance for Swansea after the Millwall game until coming on as an 85th minute substitute in the 2–1 home win over Watford on 2 January 2021.

Gibbs-White was recalled from his loan at Swansea City by Wolves on 6 January 2021. He made his first appearance for Wolves in the 2020–21 season as a second-half substitute in Wolves’s 1–0 home victory over Crystal Palace in a F.A. Cup 3rd round tie on 8 January 2021.