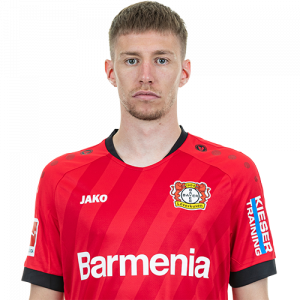 Mitchell-Elijah Weiser (born 21 April 1994) is a German professional footballer who plays as a right back for Bayer Leverkusen.

Early career
The son of former German footballer Patrick Weiser, Weiser spent his early childhood in Braunschweig, where he played for the youth teams of amateur club TV Eintracht Veltenhof.

He made his debut in the Bundesliga on 25 February 2012 in a game against Bayer Leverkusen as the youngest player for the club. This is his only appearance for the first team before transferring to Bayern.

Bayern Munich
On 1 June 2012, Weiser moved to Bayern Munich, signing a contract until 2015. On 2 January 2013, he was loaned out to 2. Bundesliga team 1. FC Kaiserslautern until the end of the season.

On his return for Bayern in the 2013–14 season, Weiser scored his first goal for the Bavarians against São Paulo on the 2013 Audi Cup.

On 5 November 2013, he made his UEFA Champions League debut with Bayern Munich in a 1–0 group stage win away to Viktoria Plzeň, coming on as a substitute for Mario Götze in the 87th minute.

On 5 April 2014, he made his first Bundesliga appearance for Bayern. With the championship already won, Weiser was selected in the starting line-up as Bayern lost 1–0 to FC Augsburg, their first loss in a league match since October 2012 to end a record 53-match unbeaten run.

Bayer 04 Leverkusen
In May 2018, Bayer Leverkusen announced that they have signed Mitchell Weiser from Hertha Berlin for a five-year contract until 2023. On 29 November 2018, he scored his first goal in European competitions in a 1–1 draw against Ludogorets Razgrad in the 2018–19 UEFA Europa League.