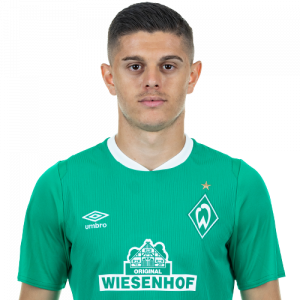 Milot Rashica (born 28 June 1996) is a Kosovan professional footballer who plays as an attacking midfielder or winger for Bundesliga club Werder Bremen and the Kosovo national team.

In September 2013, after suffering an injury, Rashica moved to Hannover for treatment and only returned to his parent club in 2014.

On 30 July 2015, Rashica made his professional debut, coming on as a second-half substitute for Uroš Đurđević in a 0–3 away loss against Southampton for the third qualifying round of 2015–16 UEFA Europa League. On 9 August, he made his Eredivisie debut, starting and assisting Denys Oliynyk in a 1–1 away draw against Willem II.

On 20 September 2015, Rashica scored his first professional goal, netting the last in a 3–0 home victory against De Graafschap. On 18 December, he scored a brace in a 5–1 routing of Twente also at the GelreDome.

He played as Vitesse won the final of the KNVB Beker 2–0 against AZ Alkmaar on 30 April 2017 to lead the club, three-time runners up, to the title for the first time in its 125-year history.

Werder Bremen
On 31 January 2018, Rashica joined Bundesliga side Werder Bremen, reportedly signing a 4.5-year contract until 2022. On 3 February 2018, he made his debut in a 1–2 away win against Schalke 04 after being named in the Werder Bremen starting eleven.