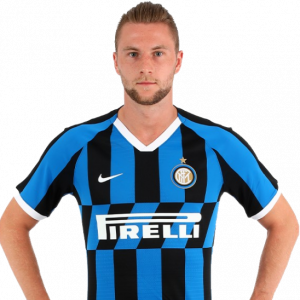 Milan Škriniar (born 11 February 1995) is a Slovak professional footballer who plays as a centre-back for Inter Milan and the Slovak national team.

On 7 July 2017, Škriniar completed a transfer to fellow Serie A side Inter Milan signing a five-year contract. The club paid a reported fee around €20 million and also included the striker Gianluca Caprari. The transfer made Škriniar the most expensive Slovak player of all time. He was presented four days later and received squad number 37, stating: “It’s amazing to think that in 18 months I’ve gone from the Slovakian league to playing for a club like Inter.”

Škriniar made his competitive debut for the club on 20 August in the opening matchday of 2017–18 Serie A versus Fiorentina as Inter won 3–0 at San Siro. He scored his first Serie A goal later on 16 September against Crotone, the opener in the 82nd minute with a right-footed shot in an eventual 2–0 away win to keep Inter’s winning streak. His second of the campaign came in matchday 10 against his former side Sampdoria on 24 October, netting again the opener as Inter won 3–2.

Škriniar was distinguished for his performances in the first part of the season, being one of the best players of the squad. He continued with his great performances even in the second part of the season, which proved clinical for the team, which returned to UEFA Champions League after six years. He concluded the season by playing in all 38 matches in league, receiving only two yellow cards.

In the 2018–19 season, Škriniar made his debut in the UEFA Champions League on 18 September in the opening group stage match against Tottenham Hotspur, playing full-90 minutes in a 2–1 comeback win at San Siro. On 2 November 2019, in a Serie A match against Bologna which ended in a 2–1 away win, Škriniar made his 100th appearance in all competitions for Inter, all of them as starter.