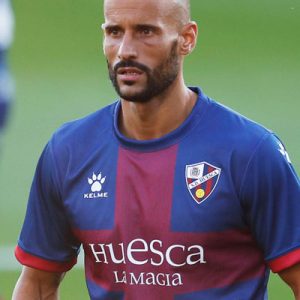 Mikel Rico Moreno (born 4 November 1984) is a Spanish professional footballer who plays as a central midfielder for SD Huesca.

After spending much of his career in Spain’s lower divisions with Conquense, Polideportivo Ejido and Huesca, he achieved promotion to La Liga with Granada in 2011, moving to Athletic Bilbao two years later. He amassed totals of 200 matches and 15 goals in the top division over eight seasons before returning to Huesca in summer 2019.

Early years
Born in Arrigorriaga, Biscay, Rico was schooled in football at local clubs CD Padura and Danok Bat CF as a child. He then joined the ranks of neighbouring CD Basconia, which acted as a farm team of Athletic Bilbao; in April 2001 he appeared as a late substitute in one Tercera División match, where Joseba Arriaga and Andoni Iraola also featured.

Huesca and Granada
In summer 2009, Rico was signed permanently by Huesca. On 19 June 2010, he scored one of his five goals during the campaign in a 1–0 away win against RC Celta de Vigo, being crucial as the Aragonese finally avoided relegation.

Athletic Bilbao
Rico joined Athletic Bilbao in late August 2013, penning a three-year deal with a €35 million buyout clause. He played his first game with his new team on 1 September, the first half of a 1–3 away defeat to Real Madrid. He featured in 94 matches in all competitions over his first two seasons – starting the vast majority – including all of his team’s matches in the 2014–15 UEFA Champions League campaign, and culminating in the final defeat to FC Barcelona in the Copa del Rey. Thereafter, he was used less frequently by head coach Ernesto Valverde, appearing in 30 fixtures during 2015–16 and 23 during 2016–17 but often as a late substitute.

Return to Huesca
On 7 July 2019, Rico returned to Huesca as a free agent. The 35-year-old scored seven goals from 42 appearances in the first season in his third spell, and the champions returned to the top tier after one year out.