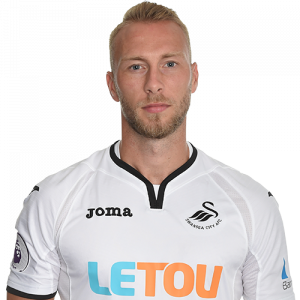 Mike Adrianus Wilhelmus van der Hoorn (born 15 October 1992) is a Dutch professional footballer who plays as a centre back for Arminia Bielefeld. He made thirteen appearances for the Netherlands U-21 team.

Utrecht
Van der Hoorn was born in Almere, Flevoland where he first joined local club SC Buitenboys, followed by FC Omniworld before being recruited into the youth ranks of FC Utrecht in 2006. He made his league debut for the first team on 15 May 2011, during the club’s 2010–11 campaign, in a home match against AZ.

Ajax
On 5 July 2013 it was announced that Van der Hoorn had transferred from Utrecht to Amsterdam for a reported fee of €3.8 million, signing a four-year contract binding him to Ajax until the Summer of 2017.

Swansea City
In July 2016, Van der Hoorn joined Swansea City on a three-year deal for a fee rumored to be around £2 million. He was made to wait for his first appearance for the Swans, coming into the side for the 3–1 home defeat to Manchester City in late September.