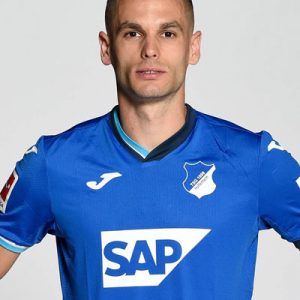 Mijat Gaćinović (born 8 February 1995) is a Serbian professional footballer who plays as a midfielder for Bundesliga club 1899 Hoffenheim and the Serbia national team.

Vojvodina
Gaćinović was born in Novi Sad while his father Vladimir played for FK Bečej. His family is from Trebinje in Bosnia and Herzegovina, where Gaćinović returned when his father finished his career. He started to play football at Leotar, before joining the youth academy of Vojvodina. He made his first team debut under manager Nebojša Vignjević on 19 March 2013, coming off the bench as a substitute for Miroslav Vulićević in a 3–0 home win over Donji Srem. On 18 May 2013, Gaćinović scored his first senior goal in a 3–2 home league victory over Radnički Niš.

After already establishing his place in the starting lineup, Gaćinović helped Vojvodina win the 2013–14 Serbian Cup in the club’s centennial year. He was named the team’s captain in early 2015, eventually becoming their top league scorer in the 2014–15 season, netting 11 goals.

Eintracht Frankfurt
In the summer of 2015, Gaćinović moved to Germany and signed with Eintracht Frankfurt. He made his official debut for the club on 28 November 2015, playing the full 90 minutes in a 1–2 away league loss against Mainz 05. On 19 May 2016, Gaćinović scored the equalizer in the first leg of the 2015–16 Bundesliga relegation playoffs against Nürnberg, before assisting the only goal in the return leg away to keep his club in the top flight.

Hoffenheim
On 4 August 2020, Gaćinović signed for Hoffenheim as part of a swap deal, with Steven Zuber going to Frankfurt. He put pen to paper on a 4-year contract.