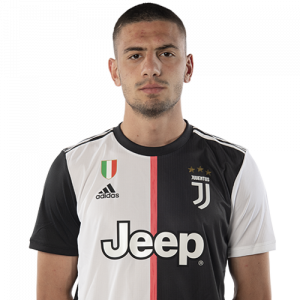 Merih Demiral (born 5 March 1998) is a Turkish professional footballer who plays as a centre-back for Serie A club Juventus and the Turkey national team.

Early years
A product of the Fenerbahçe youth system, Demiral was signed by Portuguese side Alcanenense in 2016. In January 2017, he was loaned out to Sporting B, and made his professional debut in the Segunda Liga for the latter club on 5 February 2017 in a 1–1 home draw against Famalicão. At the end of the season, he was signed outright by the club.

Juventus
On 5 July 2019, Juventus officially announced the transfer of Demiral from Sassuolo, on a five-year contract for €18 million. His salary was reportedly unfolded as €1.3 million per annum. He became the first Turkish player to play for the club. He made his club debut on 21 September, in a 2–1 home win over Verona in Serie A. He subsequently made his Champions League debut on 11 December, in the club’s final group match, earning praise in the media for his performance as he helped Juventus keep a clean sheet in a 2–0 away win over Bayer Leverkusen. He scored his first goal for the club on 12 January 2020, the opener in a 2–1 away win over Roma, which saw Juventus secure the unofficial title of “Winter Champions;” however, he was later substituted for Matthijs de Ligt after sustaining an anterior cruciate ligament injury. As a result, he was expected to be ruled out for the remainder of the season, including Euro 2020. He returned to action on 1 August, featuring as a substitute in Juventus’s 3–1 home defeat to Roma in Serie A, with Juventus already confirmed as league champions.