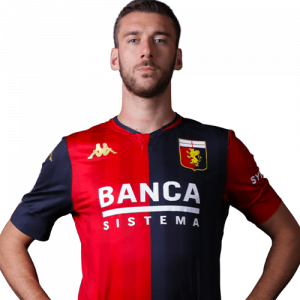 Mattia Bani (born 10 December 1993) is an Italian professional footballer who plays as a defender for Serie A club Parma, on loan from Genoa.

Reggiana
On 9 July 2012, Bani signed for Reggiana in a co-ownership deal for a peppercorn of €500. On 20 June 2013, Reggiana acquired Bani outright for free.

On 25 June 2015, Vercelli acquired the remaining 50% registration rights of Bani.

Chievo
On 28 July 2016, Bani moved to Serie A club Chievo from Pro Vercelli for €4 million transfer fee; at the same time Chievo sold goalkeeper Simone Moschin to Vercelli also for €4 million fee. Bani was immediately returned to Vercelli on a temporary deal.

Bani formally became part of the squad of Chievo in 2017–18 Serie A pre-season. He made his club debut in competitive match in the Italian cup; on 5 January 2018 Bani made his Serie A debut against Udinese.

Genoa
On 5 October 2020, he joined Genoa on a season-long loan with an obligation to buy.