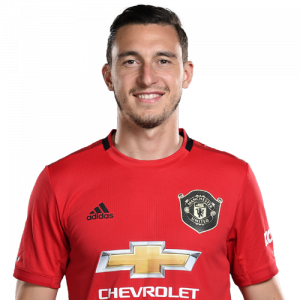 Matteo Darmian (born 2 December 1989) is an Italian professional footballer who plays as a full-back for Italian club Inter Milan, on loan from Parma.

He began his career at Milan, making his senior debut in 2006 at the age of 16 and Serie A debut in 2007 at the age of 17. In 2009, he joined Padova on loan, whom he helped avoid relegation from Serie B in his only season there. He then signed for Palermo in 2010, and one year later joined Torino, where he played for four seasons. He moved to Manchester United in July 2015, and in four years there, won the FA Cup and UEFA Europa League, before joining Parma in 2019. He signed a season-long loan deal with Inter Milan in October 2020, and will join them permanently on a three-year contract the following summer. He won the Serie A title with the club during his first season.

Darmian made his senior debut for the Italy national team in May 2014, and represented his nation at the 2014 FIFA World Cup and UEFA Euro 2016.

On 5 October 2020, Darmian joined Inter Milan on a season-long loan; Inter have an obligation to make the transfer permanent for £1.8 million at the end of the loan period.