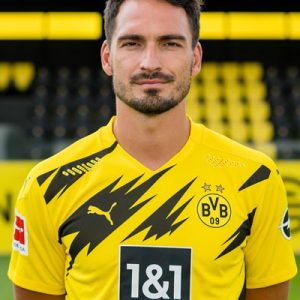 Mats Julian Hummels (born 16 December 1988) is a German professional footballer who plays as a centre back for Bundesliga club Borussia Dortmund and the Germany national team.

He came through the Bayern Munich youth academy before joining Borussia Dortmund on loan in January 2008 and officially signing for Dortmund in February 2009 for €4 million. His honours at the club include two league titles and finishing as runner up in the 2012–13 UEFA Champions League. In May 2016, Hummels signed a contract with former side Bayern, which took effect on 1 July 2016.

On 19 June 2019, Bayern Munich came to an agreement with Borussia Dortmund that would see the 30-year-old rejoin his former club, for a fee of €37 million (£33 million). He finished his time in Bavaria with 8 goals in 116 appearances. Within those three seasons, he won all three Bundesliga campaigns as well as the DFB-Pokal and three DFL-Supercups.