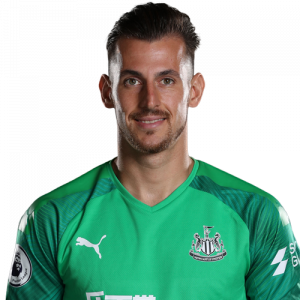 Martin Dúbravka (born 15 January 1989) is a Slovak professional footballer who plays as a goalkeeper for Premier League club Newcastle United and the Slovakia national team.

He made his debut on 11 February, playing a pivotal role and keeping a clean sheet in a 1–0 win against Manchester United.He became the sixteenth Slovak player and only the second Slovak goalkeeper, after Ján Mucha, to start in a Premier League fixture.

Dúbravka is a third-generation goalkeeper: his father and grandfather also played in the position.Dúbravka has been dubbed the “quintessential sweeper-keeper” due to his “outstanding footwork” and he believes “in modern football the keeper’s almost like a libero. You need to play with the ball, not just kick it long”.