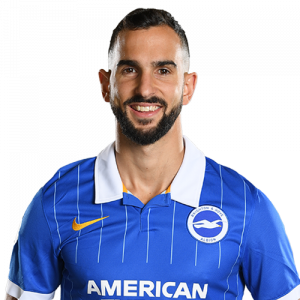 Martín Montoya Torralbo (born 14 April 1991) is a Spanish professional footballer who plays as a right back for Real Betis.

He started playing with Barcelona, going on to appear in 67 competitive games over five La Liga seasons and win seven major titles (two goals scored). In the competition he also represented Betis and Valencia, totalling 112 matches and three goals all clubs combined.

Barcelona
Born in Gavà, Barcelona, Catalonia, Montoya started playing football for hometown club CF Gavà, moving to FC Barcelona’s youth system, La Masia, at the age of 8. After progressing through its ranks, he was promoted to the B-team in 2009.

Valencia
On 1 August 2016, Montoya signed a four-year deal with Valencia following the expiration of his contract with Barcelona. He played 29 matches and scored twice in his first season, with his team finally ranking in 12th place.

Brighton & Hove Albion
On 9 August 2018, Montoya signed with English club Brighton & Hove Albion for €7 million, subject to international clearance. He made his debut in the Premier League ten days later, playing 90 minutes in the 3–2 home win over Manchester United. He added four appearances in their run in the FA Cup, including the semi-final loss to Manchester City at Wembley; he played 25 league matches during the season, as the team secured their division status for the second time a row.

Betis
Montoya returned to Spain and Betis on 25 August 2020, after agreeing to a four-year contract.