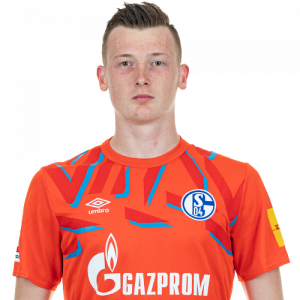 Markus Schubert (born 12 June 1998) is a German footballer who plays as a goalkeeper for German club Eintracht Frankfurt, on loan from Schalke 04.

Dynamo Dresden
Starting in 2015–16, Schubert joined the main Dynamo Dresden squad, becoming the youngest active player in the club’s history after debuting in a game against Preußen Münster on 28 November 2015. He was made Dresden’s main goalkeeper in 2018–19, appearing full-time in all league matches except for the last three. The decision to not field Schubert in those matches was made by then-coach Cristian Fiel in an effort to “protect” him from hostile behaviour directed at him by supporters,following the announcement of his departure from the club.

On 15 December 2019, he made his Bundesliga debut in a 1–0 home win against Eintracht Frankfurt when he came on for Amine Harit in the 69th minute after goalkeeper Alexander Nübel received a red card. Following a string of poor performances by Nübel, who had already announced his move to Bayern Munich, he was permanently replaced by Schubert, who spent the rest of the season as Schalke’s main goalkeeper. Prior to the 2020–2021 season, he was demoted to substitute keeper, with coach David Wagner electing to field Ralf Fährmann instead, who had previously been out on a loan.

On 30 September 2020, he joined Eintracht Frankfurt on a year-long loan. Schalke, in turn, loaned Frederik Rønnow from Frankfurt, who took Schubert’s place and went on to become the club’s primary goalkeeper for the season.