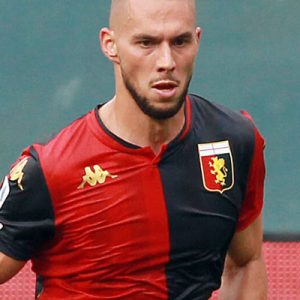 Marko Pjaca (born 6 May 1995) is a Croatian professional footballer who plays as a winger for Serie A club Genoa, on loan from Juventus, and the Croatia national team.

Pjaca began his professional club career in Croatia with Lokomotiva in 2012, before moving to Dinamo Zagreb in 2014. After winning consecutive domestic doubles with Dinamo, he joined Juventus in 2016, where he also won a domestic double in his first season. Pjaca was then sent on loan, first to Schalke 04 for the second part of the following season, then to Fiorentina during the 2018–19 season, and finally to Anderlecht during the 2020 winter transfer deadline.

At international level, Pjaca represented Croatia at UEFA Euro 2016 and at the 2018 FIFA World Cup, winning a runners-up medal at the latter tournament.

Loan to Genoa
On 19 September 2020, Pjaca moved on a season-long loan to Genoa. On his debut, on 20 September, Pjaca scored a goal in a 4–1 win against Crotone.