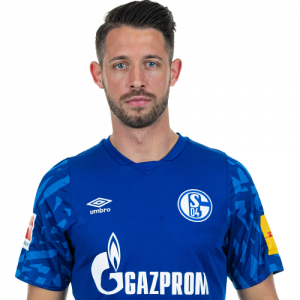 Mark-Alexander Uth (born 24 August 1991) is a German footballer who plays as a striker for Bundesliga club Schalke 04. Once-capped by Germany U20 in 2010, Uth was called up to the Germany national football team in 2018.

Club career
Youth
Uth started playing football at TuS Langel, a small club based in the south of Cologne. Having joined 1. FC Köln in 2004, he left in 2007 for Viktoria Köln.

1. FC Köln II
In 2009, he returned to 1. FC Köln and was promoted to the second team playing in the fourth-tier Regionalliga West in 2010. After good performances there, he became a member of the first team’s squad for the 2011–12 Bundesliga season, but did not make an appearance. Because the club had several further young strikers, it was decided that Uth could leave the club.

SC Heerenveen
In May 2012, it was announced that Uth had signed for SC Heerenveen on a three-year contract.

He scored a hat-trick while playing on loan for Heracles Almelo in their match against RKC Waalwijk on 28 September 2013.

1899 Hoffenheim
He signed for Bundesliga side 1899 Hoffenheim in July 2015. Depending on the source, the transfer fee paid to Heerenveen was reported as €2 to 3 million.

Schalke 04
In January 2018, it was announced that Uth would move to Schalke 04 on a free transfer in summer. He signed a contract until 2022.