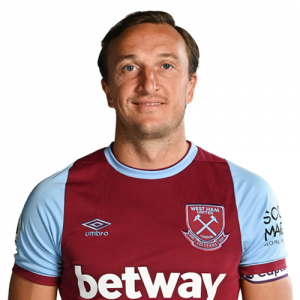 Mark James Noble (born 8 May 1987) is an English professional footballer who plays as a central midfielder and is captain of Premier League club West Ham United. His loyalty and services to the club have earned him the nickname “Mr. West Ham”. He has played almost all of his youth and first team football for the club apart from two short loan spells at Hull City and Ipswich Town in 2006.

Noble has played more Premier League games for West Ham than any other player, in addition to being the longest serving player in their current squad, having been in the first team since 2004. He is West Ham’s first-choice taker for penalty kicks and has won the club’s Hammer of the Year trophy twice, as well as being voted Hammer of the Decade at the end of the 2010s.

He has played for England at U16, U17, U18, U19 and U21 levels. He captained the U21 side, scoring three goals in 20 appearances. Despite appearing for England at numerous youth levels, he has yet to be capped for the full international side.

In 2020 he was rated as the player with the second highest conversion rate for penalty kicks in the world over the last 20 years. His 90.5% conversion rate was only beaten by Robert Lewandowski’s rate of 91.1%.