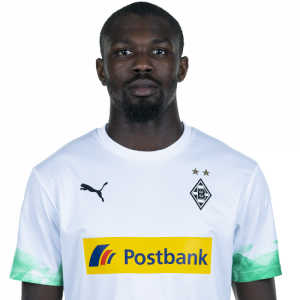 Marcus Lilian Thuram-Ulien (born 6 August 1997) is a French professional footballer who plays as a forward or left winger for Bundesliga club Borussia Mönchengladbach and the France national team.

Sochaux
Thuram started his professional career at Sochaux, where he also played for the club Youth Academy. He made his Ligue 2 debut with the club on 20 March 2015 against Châteauroux replacing Edouard Butin after 83 minutes. He played 43 total matches for Sochaux and scored one goal, in a 3–1 loss at Tours on 14 April 2017.

Guingamp
On 5 July 2017, Thuram joined Ligue 1 club Guingamp for an undisclosed fee. In August 2018, he gained attention for playing against Paris Saint-Germain goalkeeper Gianluigi Buffon, a long-term teammate of his father at Parma and Juventus.

Thuram scored an added-time penalty on 9 January 2019 to eliminate holders PSG from the quarter-finals of the Coupe de la Ligue, having earlier missed from the spot in the 2–1 win at the Parc des Princes. Twenty days later he scored the equaliser in a 2–2 home draw with Monaco in the semi-final, and his attempt in the subsequent penalty shootout was saved by Danijel Subašić though Guingamp nonetheless advanced.

Thuram made his debut for Gladbach on 9 August in the first round of the DFB-Pokal away to 2. Bundesliga club SV Sandhausen, and scored the only goal. He got his first Bundesliga goals on his fifth appearance on 22 September, scoring both of a 2–1 home win over Fortuna Düsseldorf.

On 31 May 2020, Thuram scored twice in a 4–1 win over 1. FC Union Berlin. He took a knee after his first goal of the match and dedicated the strike in honour of ongoing protests in the United States following the killing of George Floyd.