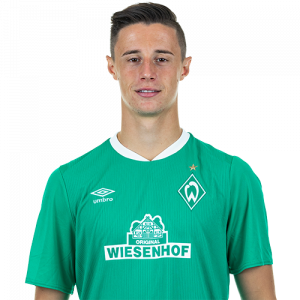 Marco Friedl (born 16 March 1998) is an Austrian professional footballer who plays as a left-back or centre-back for Werder Bremen.

Youth career
Friedl began his youth career at hometown club SV Kirchbichl in 2002, before moving to fellow Austrian club FC Kufstein in 2007. In 2008, he moved to the youth academy of German club Bayern Munich.

Bayern Munich
Friedl began his senior career with Bayern Munich II in the 2015–16 season, making his debut in the Regionalliga Bayern on 22 November 2015 in a 2–0 derby loss against 1860 Munich II.

Friedl scored his first goal for Bayern Munich II in the Regionalliga Bayern on 27 October 2017, opening the scoring in a 1–1 home draw against FV Illertissen.

Friedl began his first team career with Bayern Munich in the 2017–18 season, making his professional debut as a starter in the UEFA Champions League on 22 November 2017 in a 2–1 away win against Anderlecht. Three days later, Friedl made his league debut for the first team when he came on as a half-time substitute for James Rodríguez in the Bundesliga away match against Borussia Mönchengladbach, which finished as a 1–2 loss for Bayern.

Werder Bremen (loan)
On 25 January 2018, Friedl signed with Werder Bremen on an 18-month loan deal from Bayern Munich without an option to buy, lasting until 30 June 2019.

Werder Bremen
In May 2019, Werder Bremen announced the permanent signing of Friedl for the 2019–20 season. Friedl agreed a “long-term” contract with the club. The transfer fee was reported as €3 million or up to €3.5 million including possible bonuses, depending on the source.

Friedl scored his first Bundesliga goal on the sixth matchday of the season, against Borussia Dortmund in a 2–2 draw.