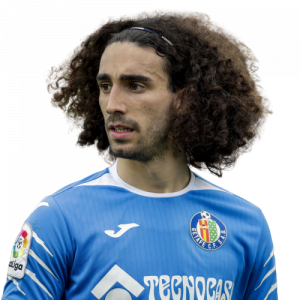 Marc Cucurella Saseta (born 22 July 1998) is a Spanish professional footballer who plays for Getafe CF. Mainly a wide midfielder, he can also play as a left-back.

Born in Alella, Barcelona, Catalonia, Cucurella started playing futsal in FS Alella before joining RCD Espanyol’s youth teams in 2006; in 2012, he moved to FC Barcelona. On 26 November 2016, while still a junior, he made his senior debut with the reserves by starting in a 4–0 Segunda División B home routing of CE L’Hospitalet.

Cucurella contributed with 17 appearances for the side, achieving promotion to Segunda División in the play-offs. On 7 July 2017, he renewed his contract until 2021, with a € 12 million clause. He made his professional debut on 1 September, starting in a 2–2 away draw against Granada CF.

Cucurella made his first team debut on 24 October 2017, coming on as a late substitute for Lucas Digne in a 3–0 Copa del Rey away win against Real Murcia. He scored his first senior goal the following 17 March, netting the game’s only in a home defeat of Lorca FC.

On 31 August 2018, Cucurella was loaned to fellow La Liga side SD Eibar, for one year with a €2 million buyout clause. At the end of his loan, Eibar exercised Cucurella’s clause, making him a permanent player for the Basque team; along with the transfer, Barcelona added a €4 million buyback option.

On 16 July 2019, after just sixteen days as a permanent Eibar player, Barcelona triggered Cucurella’s €4 million buyback clause, only to loan him out to Getafe CF two days later for the incoming season, with an option to buy for €6 million and 40% of the rights remaining to Barça.