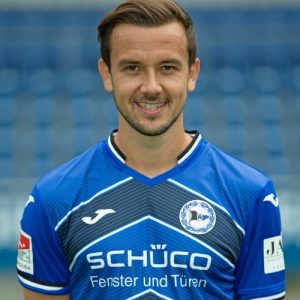 Manuel Prietl (born 3 August 1991) is an Austrian professional footballer who plays as a midfielder for Arminia Bielefeld.

Prietl began his career in the youth of SV Gleinstätten, where he was active until 2006. He then spent a season in the youth department of Kapfenberger SV before returning to his home club. There he was immediately brought into the first team squad. In 2009/10 he managed with the Gleinstätter the promotion from the Styrian regional league to the regional league middle, the third highest Austrian league. There he made his debut on August 6, 2010 against FC Blau-Weiß Linz. Overall, Prietl was used in all games.

He was then committed by the second division TSV Hartberg. His first championship game for the Oststeirer was on July 12, 2011, again against FC Blau-Weiß Linz. The central midfielder was replaced in the 70th minute for Fabian Harrer. After good performances, he switched to Bundesliga club SV Mattersburg after the 2011/12 season.

There Prietl was able to convince again and became a regular player straight away. On his debut on July 21, 2012 under coach Franz Lederer, he played through. The home game against SC Wiener Neustadt was won 2-0.

Prietl has already played three games for the Austrian U-21 national team. He made his international debut on September 7, 2012 under coach Werner Gregoritsch against the Netherlands in Tilburg as part of the U-21 European Championship qualification. He came on for Remo Mally at halftime and received a yellow card in the 82nd minute. The away game was lost 1: 4.

For the 2016/17 season he moved to the German second division Arminia Bielefeld, where he is now under contract until 2021. In the 2017/18 and 2018/19 seasons, Prietl was a regular at Arminia Bielefeld and made 32 league games each season. At the start of the 2019/20 season, the defensive midfielder scored 2 goals for Arminia Bielefeld in the first 4 games of the season.