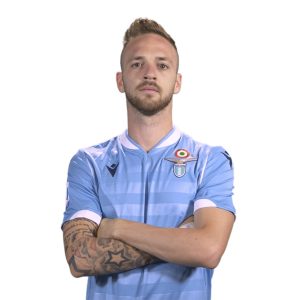 Manuel Lazzari (born 29 November 1993) is an Italian professional footballer who plays as a right midfielder or right-back for Serie A club Lazio and the Italy national team.

Club career
Lazzari made his professional debut in the Lega Pro for SPAL on 31 August 2014 in a game against Pontedera. Flying under the radar for quite some time, since arriving in the Serie A for the 2017–18 season – following the club’s double promotion from the Serie C (2015–16) and Serie B (2016–17) – he has established himself as a main component in the Emilia-Romagna side’s success.

On 12 July 2019 Lazzari moved to S.S. Lazio. The transfer fee was €10m and Alessandro Murgia also moving to SPAL. Lazzari won his first trophy with Lazio on 22 December 2019, playing the full ninety minutes in their 3–1 upset victory over Juventus in the 2019 Supercoppa Italiana held at the King Saud University Stadium in Riyadh, Saudi Arabia.

International career
Lazzari was given his first senior international call-up for Italy in September 2018, by manager Roberto Mancini, for Italy’s opening UEFA Nations League matches against Poland and Portugal later that month. On 10 September, Lazzari made his debut for Italy in the 1–0 away loss to Portugal.