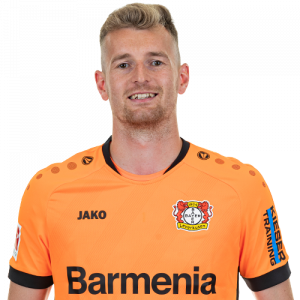 Lukáš Hrádecký (born 24 November 1989) is a Slovak-born Finnish goalkeeper who plays for Bayer Leverkusen and the Finland national team.

Hrádecký was born in Bratislava, Slovakia. He began his senior club career playing for TPS, before signing with Esbjerg fB at age 19 in 2009. After winning his first trophy, the Danish 1st Division, during his third season in Denmark, he helped Esbjerg win the Danish Cup in 2013.

A Finnish international, Hrádecký was named Finnish Footballer of the Year by the Football Association of Finland three years in a row between 2016 and 2018. He made his international debut for Finland in May 2010 at the age of 20, and has over 60 caps. He appeared in nine out of ten of Finland’s UEFA Euro 2020 qualification matches and helped the national team secure its first ever appearance at the UEFA European Championship.

TPS
Hrádecký began his career in Finnish club Turun Palloseura. In 2008, he played in the International Karel Stegeman U-19 Youth Tournament in Ruurlo, Netherlands where he won the prize for best goalkeeper.

Esbjerg
On 10 January 2009, Hrádecký transferred to Esbjerg fB and signed a four-year contract with the five-time Danish champions. On 3 August 2010 it was announced that Hrádecký had been called to be tested for a week by Manchester United to strengthen their goalkeeping department after the departure of Tom Heaton. However, he chose to seek the chance to be the primary keeper in Esbjerg instead. After the 2012–13 Superliga season Hradecky’s contract with Esbjerg fB expired, and an agreement to prolong the contract was not reached.

Brøndby
On 12 June 2013, Hrádecký joined Danish Superliga rivals Brøndby IF on a four-year contract on a free transfer. On 21 June 2013 Hradecký made his debut in the Superliga in a match against Vestsjælland.

Bayer Leverkusen
In May 2018, Bayer Leverkusen announced the signing of Hrádecký for the 2018–19 season on a free transfer. He agreed a contract until 2023.