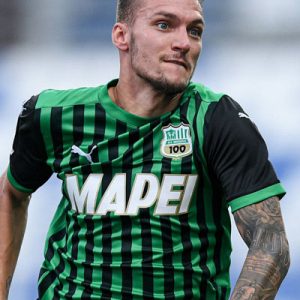 Lukáš Haraslín (born 26 May 1996) is a Slovak professional footballer who plays as a right-winger for Sassuolo in Serie A and the Slovak national team.

Parma
For two seasons Haraslín was a player of Parma’s Primavera team. Over the two seasons he collected 29 league caps for the team and scored 11 goals, playing most of the matches as a winger.

Lechia Gdańsk
On 7 July 2015, Haraslín joined Lechia Gdańsk on a three-year deal, although an apparent interest was reported from numerous clubs, yet some only requested Haraslín on a loan.Haraslín debuted for Lechia on 16 August 2015 a wild 3–3 tie against Wisła Kraków. Although he was only fielded in the second half, coming on as a substitute for Bruno Nazário, he scored just after 6 minutes on the pitch, setting the score to 2–2. The following week, Haraslín scored 2 in a 3–1 win over Górnik Łęczna. In late October Haraslín suffered an injury that kept him out of action until early December. After he returned, he played in almost all of the games, although mostly as a substitute. He completed the season with 3 goals in 20 games.

Sassuolo
In January 2020 Haraslín went on loan to Italian side Sassuolo, with the club having an obligation to buy at the end of the loan period.