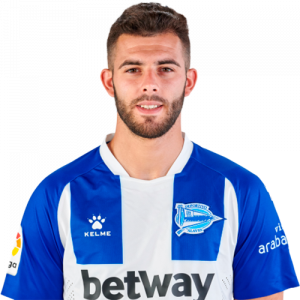 Luis Jesús Rioja González (born 16 October 1993) is a Spanish footballer who plays for Deportivo Alavés as a left winger.

Rioja was born in Las Cabezas de San Juan, Seville, Andalusia, and was a CD Cabecense youth graduate. He made his senior debut on 2 September 2012, playing the last 22 minutes of a 2–0 Tercera División home win against Cádiz CF B.

Rioja scored his first senior goal on 18 November 2012, in a 4–0 home routing of Arcos CF, and finished the campaign with four goals in 35 appearances. On 27 June of the following year, he signed a three-year deal with Real Madrid and was assigned to the C-team in Segunda División B.

On 27 July 2014 Rioja joined another reserve team, Celta de Vigo B in the third division. On 4 January 2017, he moved to fellow league team Marbella FC.

On 23 July 2018, Rioja agreed to a two-year contract with Segunda División side UD Almería. He made his professional debut on 17 August, starting in a 0–1 away loss against Cádiz CF.

Rioja scored his first professional goal on 26 August 2018, netting the opener in a 1–1 home draw against CD Tenerife. He was regular starter for the club during the campaign, contributing with four goals in 39 appearances.

On 1 July 2019, Rioja signed a four-year deal with La Liga side Deportivo Alavés, as the club activated his release clause. He made his debut in the category on 18 August, starting in a 1–0 home defeat of Levante UD.