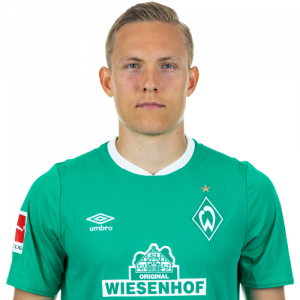 Hans Carl Ludwig Augustinsson (born 21 April 1994) is a Swedish professional footballer who plays for Werder Bremen and the Swedish national team as a left-back.

A product of Brommapojkarna’s academy, he played two senior seasons with the club before leaving for IFK Göteborg in 2013. With an injury-filled first year, his breakthrough had to wait until the 2014 season, in which he was named the best left back of the campaign. A move to Copenhagen followed in January 2015 for an estimated record fee of €1.4 million. He has ended up being club champion twice, with Copenhagen in the 2015–16 season and 2016–17 season, and runner-up three times with his teams; in Superettan 2012, Allsvenskan 2014 and in the 2014–15 Danish Superliga. He won one domestic cup title with IFK Göteborg 2012–13 and three consecutive domestic cup titles with Copenhagen in 2014–15, 2015–16 and 2016–17.

Augustinsson was part of the Sweden under-21 squad that qualified and later won the European U21 Championship in 2015, playing all five games in the main tournament and scoring in the penalty shoot-out against Portugal in the final. He made his first appearance for the senior national team in January 2015, and was part of Sweden’s Euro 2016 squad.

Werder Bremen
On 30 January 2017, Werder Bremen announced the signing of Augustinsson for the forthcoming 2017–18 Bundesliga season. In August 2018, upon his return from holidays after the 2018 FIFA World Cup, he agreed a contract extension with Werder Bremen.

On 6 July 2020, Werder Bremen played 1. FC Heidenheim in the second leg of the Bundesliga relegation playoff, having tied the first leg 0–0. In the 90+4th minute, Augustinsson scored to give Werder Bremen a 2–1 lead. They match ended 2–2, and Bremen stayed in the Bundesliga on away goals.