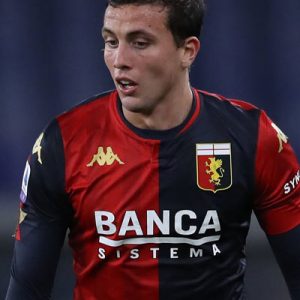 Luca Pellegrini (born 7 March 1999) is an Italian professional footballer who plays as a left back for Serie A club Genoa, on loan from Juventus.

Roma
On 17 April 2018, Pellegrini signed his first professional contract with A.S. Roma keeping him at the club until 2021.

Pellegrini joined the first team in the 2018–19 season, aged 19. He made his professional and Serie A debut in a 4–0 win over Frosinone on 26 September 2018, making the assist for Aleksandar Kolarov’s goal. He made his UEFA Champions League debut on 2 October 2018, in the group stage match won 5–0 against FC Viktoria Plzeň.

Juventus
On 30 June 2019, Luca Pellegrini joined Serie A champions Juventus for €22 million, with Leonardo Spinazzola moving in the opposite direction for €29.5 million. On 19 August 2019, he rejoined Cagliari on loan for the 2019–20 season. On 26 September 2020, Pellegrini moved to Genoa on a one-year loan.