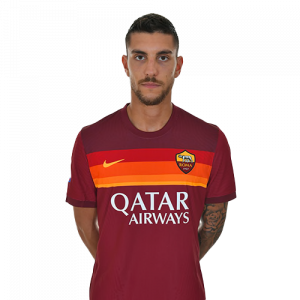 Lorenzo Pellegrini (born 19 June 1996) is an Italian professional footballer who plays as a midfielder for Serie A club Roma, which he captains, and the Italian national team.

Pellegrini is an academy graduate of Roma, having joined the club in 2007, and made his senior debut in 2015. He departed for Sassuolo later that year where he made over 50 appearances across all competitions before returning to Roma in July 2017.

Roma
Born in Rome, Pellegrini, who had suffered from arrhythmia as a youngster, joined the youth academy of local side Roma at the age of nine. Having previously represented the club in the UEFA Youth League, he was handed his senior debut at the age of 18 by manager Rudi Garcia on 22 March 2015, coming on as a second-half substitute for Salih Uçan in a 1–0 Serie A win over Cesena.

Sassuolo
On 30 June 2015, Pellegrini signed for fellow Serie A side Sassuolo for a fee of €1.25 million. In terms of the transfer agreement, Roma retained a buy-back-clause which afforded the club the opportunity to re-purchase Pellegrini at a future stage.

Return to Roma
On 30 June 2017, Roma exercised the buy back clause of €10 million, which was included in Pellegrini’s transfer agreement with Sassuolo, to bring him back to Rome on a five-year deal. On the same day Roma youth product Federico Ricci joined Sassuolo outright, for €3 million fee. Pellegrini scored his first-ever goal for the club on 1 December 2017, netting Roma’s third goal in a 3–1 league win over SPAL.