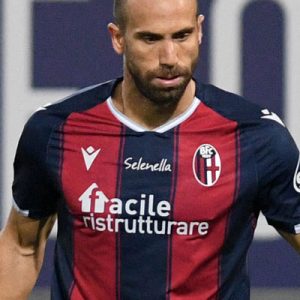 Lorenzo De Silvestri (born 23 May 1988) is an Italian professional footballer who plays as a defender for Bologna. He is an offensive full-back with an imposing physique; although naturally a right-back, he is capable of playing on either flank as well as in the middle.

Lazio
Born in Rome, De Silvestri is a product of the highly successful Lazio youth system. He was promoted to the senior team during the 2006–07 season, during which he made his first two league appearances.
His first senior appearance was a match in the UEFA Intertoto Cup in 2005 at the age of 17. His debut in Italian competition came a year later, during a 4–0 Coppa Italia victory over Rende, scoring the fourth goal of the match.

Fiorentina
On 26 August 2009, ACF Fiorentina signed the right-back from S.S. Lazio on a five-year deal, he was presented to the press in Florence on 27 August; on successive declarations, De Silvestri stated he had reluctantly decided to leave his favourite club due to his strained relationship with president Claudio Lotito. After an injury that prevented him from appearing in the early weeks of the season, De Silvestri became a regular under head coach Cesare Prandelli and completed the 2009–10 campaign with a total 27 appearances. Under new Fiorentina boss Siniša Mihajlović, De Silvestri was originally confirmed as a regular, but successively lost his place as a starter in favour of Gianluca Comotto after the poor performance the team. However, he re-took the starting position (right-back) after the winter break. He also played the last matches before the winter break as starting left-back to replace the unavailable Manuel Pasqual.

Sampdoria
On 16 July 2012, De Silvestri was officially loaned to Sampdoria for the 2012–13 season, with Sampdoria having the option to sign him in full following the season. He made his début as a second-half substitute for Gianni Munari against Napoli on 30 September 2012.

Torino
On 18 August 2016, De Silvestri was signed by Serie A rivals Torino for a reported transfer fee of €3.6 million plus bonuses.

Bologna
On 17 September 2020, De Silvestri signed with Bologna for free.