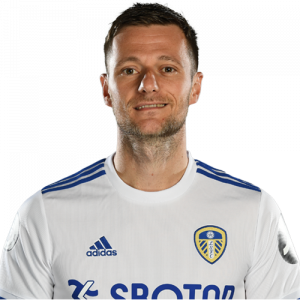 Liam David Ian Cooper (born 30 August 1991) is a professional footballer who plays as a centre-back for Premier League club Leeds United and the Scotland national team.

Cooper came through the youth academy at Hull City before making his debut with the first team at the age of 16. He spent time on loan at Carlisle United and Huddersfield Town, before moving to Chesterfield in 2012. He won promotion to League One with the Spireites in 2014 before joining Leeds United later that year. He has played over 200 games for the Yorkshire club, captaining them to promotion to the Premier League in 2020.

Cooper made his senior debut for Scotland national team in 2019, having previously played for the under-17s and under-19s during his time at Hull City.

Hull City
Cooper joined his hometown club Hull City in 2002 at under-12 level. He was in the youth team that won the Football League Youth Alliance Cup Final against Colchester 3–0, scoring the opening goal but later being sent off for a deliberate handball.

During the 2007–2008, he was given the number 37 shirt but failed to make any appearances the Tigers went on to win promotion to the Premier League for the first time in their history. He made his debut as 16-year-old for the club against Swansea City in the League Cup on 26 August 2008 and featured as an unused substitute in their Premier League defeat to Wigan Athletic four days later after signing his first professional contract. A year later, he would make his first Premier League start on 26 September 2009 at Anfield in a 6–1 defeat to Liverpool.

Over the following three years, Cooper would find his opportunities limited at Hull and spent brief periods out on loan at Carlisle United and Huddersfield Town in 2011. He briefly returned to the first team under Nick Barmby to form a solid partnership with James Chester in March 2012 for the rest of the season following an injury to Jack Hobbs. When Barmby departed for Steve Bruce in the summer of 2012, he was replaced by the new manager’s son Alex.

Chesterfield
Cooper joined League Two side Chesterfield in November 2012. He made his debut in a 6–1 win over Hartlepool United in the FA Cup, and scored on his league debut two weeks later in a 2–1 victory over Oxford United. The 2012–13 season was Cooper’s first year of playing regular professional football, making 31 appearances in all competitions as the Spireites narrowly missed out on a play–off spot.

The 2013–14 would prove to be a memorable campaign for both Cooper and Chesterfield under manager Paul Cook. The club reached the 2014 Football League Trophy Final and played at Wembley Stadium, but ultimately lost 1–3 to Peterborough United in front of more than 35,000 fans. In the league, Cooper formed a formidable partnership with Ian Evatt as the team won the division and were promoted to League One. At the end of the season, Cooper was named in the PFA Team of the Year along with two other Chesterfield players.

Leeds United
Early years and captaincy
Cooper came to the attention of his boyhood club Leeds United after impressing Sporting Director Nicola Salerno in a 2–2 preseason draw in the summer of 2014. After weeks of negotiations, Leeds agreed a deal for £600,000 plus add-ons relating to appearances, a future sale and promotion; with Cooper joining the club on 13 August.[20] After winning promotion to the Premier League in 2020, the Spireites received an additional £150,000 from the sale.[21]

He was made club captain by Neil Redfearn midway through his debut season but struggled for consistency under a succession of managers, losing his starting place to Sol Bamba and later to Pontus Jansson, as he would go on to make over 100 appearances during his first four seasons with the club. During a period of 30 games between 2017 and 2018, Cooper was sent off three times and received another six game ban for a stamp on Reading defender Reece Oxford.[22] His propensity to be a liability in games earned him the disparaging nickname ‘League One Liam’ among Leeds fans at the time, but Cooper remained a highly respected captain amongst his team mates.[23]

Bielsa and promotion
Cooper retained the captaincy after the shock appointment of the world renowned Marcelo Bielsa as Head Coach in the summer of 2018. In Bielsa’s first game, he scored the third goal in a comprehensive 3–1 victory over promotion favourites Stoke City, as Leeds ascended to the top of the Championship by Christmas.[24] Leeds would eventually lose out on automatic promotion to Norwich City and Sheffield United as their form dipped in the second half of the 2018–2019 campaign, before losing 3–4 on aggregate to Derby County in the play-offs.[25] In spite of a disappointing end to a season that had long looked so promising, Cooper was widely perceived to be one of the most improved players in the team under the new head coach, and was included in the EFL Championship Team of the Season, EFL Team of the Season,[26] as well at the PFA’s Championship Team of the Season with team mates Pontus Jansson and Pablo Hernández.[27]

The 2019–2020 marked Leeds’ centenary year and Cooper’s sixth season with the club. He would sign a new five year deal with the club in September, and would be present at The Best FIFA Football Awards 2019 to collect the FIFA Fair Play Award on behalf of Bielsa and the Leeds United team for allowing Aston Villa to score an uncontested goal in the previous season.[28][29] On the pitch, The team’s nine–point lead at Christmas in the automatic promotion zone was completely eroded by the beginning of February after a run of four defeats in five games.[30] With questions again being asked of Leeds ability to maintain the form over the course of a full season, Cooper would score a crucial equaliser in a 1–1 draw in the following game against promotion rivals Brentford.[31] It would later transpire that Cooper’s son had been in hospital for three days prior to the game and there were doubts over whether he would play at all.[32] The result proved to be a catalyst for the Yorkshire club’s season, as they went on to win their next five games with Cooper being part of a defence that would also keep five clean sheets, taking the team back to the summit of the table and reestablishing a seven–point lead in the automatic promotion places.[33] The momentum building around the club with only nine games remaining would be halted six days later when the season was suspended due to the COVID-19 pandemic.[34]

The season would resume behind closed doors three months later in June, with Leeds’ five match winning run coming to an immediate end with a 0–2 defeat to Cardiff City. Leeds would only drop two further points from the remaining eight games, as Leeds secured promotion to the Premier League on 17 July after West Yorkshire rivals Huddersfield Town beat West Bromwich Albion 2–1, and won the Championship title the following day after Brentford failed to beat Stoke City.[35] Cooper became the first Leeds United captain to win promotion since Gordon Strachan in 1990 and lifted the Championship title on 22 July after a 4–0 win over Charlton Athletic on the final day of the season, immortalising himself in the club’s history.[36] He would also retain his place in the PFA Team of the Year.[37]

Premier League
Cooper missed Leeds’ first Premier League game for 16 years in a 3–4 away defeat to Liverpool on the opening day of the season after picking up an injury. In the following match, he made his first Premier League start since September 2009 in a 4–3 win over Fulham. The period between starts at 10 years, 359 days was a league record for the greatest length of time between starts.[38] The following game against Sheffield United also marked his 200th appearance with the club and the first player to reach that number of games since Luciano Becchio in 2012.[39] Cooper joins a select group of just under 70 players[40] that have made over 200 appearances for the club, including current teammates Stuart Dallas and Kalvin Phillips who also hit the milestone later in the season.