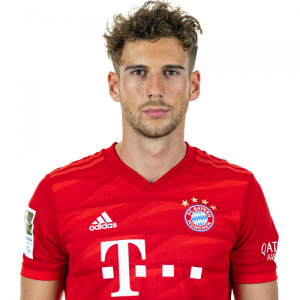 Leon Christoph Goretzka (born 6 February 1995) is a German professional footballer who plays as a midfielder for Bundesliga club Bayern Munich and the Germany national team.

Goretzka with Bayern Munich in 2019
On 1 July 2018, Goretzka officially joined Bayern by signing a four-year contract until June 2022. On 12 August 2018, in the DFL Super Cup, he came on for Thomas Müller in the 64th minute. This was Goretzka’s first appearance for Bayern. On 1 September, he scored his first goal for the club in a 3–0 away victory over VfB Stuttgart. The following year, on 19 January 2019, he scored his first ever brace in the Bundesliga, scoring twice in a 3–1 win over Hoffenheim. On 15 February 2019, Goretzka scored an own goal in a Bundesliga game after 13 seconds; no Bayern player had yet touched the ball.

On 18 May 2019, Goretzka won his first Bundesliga title as Bayern finished two points above Dortmund with 78 points. A week later, he won his first DFB-Pokal as Bayern defeated RB Leipzig 3–0 in the 2019 DFB-Pokal Final. He did not appear in the match as he was out injured.

2019–20 season
On 26 November 2019, Goretzka scored his first Champions League goal during a 6–0 away win at Red Star Belgrade. He played vital part of Bayern’s treble win under Hans-Dieter Flick. He played most of the games, including the whole Champions League campaign, making a midfield duo with Joshua Kimmich. After Benjamin Pavard got injured and Kimmich was asked to play as a right-back, Goretzka played in a box-to-box midfielder role next to Thiago, including in the Champions League final.