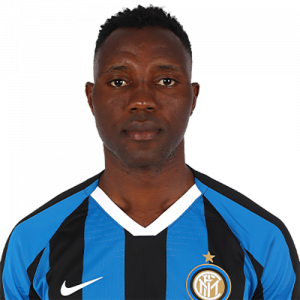 Kwadwo Asamoah is a Ghanaian professional footballer who plays for Italian Serie A club Cagliari and the Ghana national team.

Mainly a left midfielder or left-back, he has also occasionally been deployed as a central midfielder.

He began his professional career with Italian club Udinese in 2008; his consistent performances earned him a transfer to Juventus in 2012, where, with his energy, versatility, and technical skills, he played a key role in helping the club to six consecutive Serie A titles between 2013 and 2018, among other titles, although his appearances at the club were limited by injuries during his later seasons. He joined Inter in 2018. At international level, he has represented Ghana in four Africa Cup of Nations tournaments, and two FIFA World Cups.

Asamoah was awarded CAF Most Promising African Player in 2010 and named Ghana Player of the Year twice consecutively for 2012 and 2013. In 2013, Asamoah was ranked as the 27th best footballer in the world by Bloomberg.

On 3 February 2021, Asamoah signed with Cagliari a contract until 30 June 2021. He made his debut in Sardinia on 28 February 2021, in the 2–0 victory in home against F.C. Crotone. He became the most-capped African player in the Italian Serie A history, after making his 271st appearance in that match,surpassing his fellow Ghanaian compatriot Sulley Muntari who he was tied on 270 matches before the game.