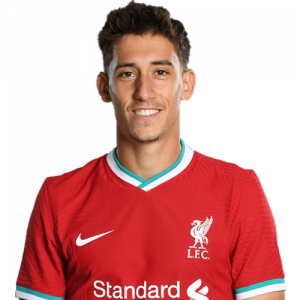 Konstantinos “Kostas” Tsimikas (born 12 May 1996) is a Greek professional footballer who plays as a left-back for Premier League club Liverpool and the Greece national team.

Tsimikas was born in Thessaloniki, and hails from the village of Lefkonas, Serres. He started his career from his village’s local team and he transferred to AS Neapoli Thessaloniki when he was 14 years old. In 2013, he moved to Panserraikos and he scored 5 goals during 2013–14 season in Gamma Ethniki.

Tsimikas made his Olympiacos debut in the Super League in a match against AEL Kalloni on 19 December 2015.

On 28 December 2016, Tsimikas signed for Danish club Esbjerg on a loan until the end of the 2016–17 season. On 17 February 2017, in his debut with the club, he scored a goal in a 3–0 home win game against SønderjyskE Fodbold. He left the club after 13 games, and returned to Olympiacos.

On 30 June 2017, Tsimikas made another loan move, this time to Dutch club Willem II on a season-long contract. He was a regular in the 2017–18 Eredivisie, starting 32 of the 34 matches, and also scored goals. In the quarter-finals of the KNVB Cup, his deflected free kick took the tie into extra time, and Willem II went on to beat Roda on penalties. Tsimikas’ spectacular bicycle kick in a 3–2 win against FC Utrecht was voted Voetbal International Goal of the Month and contributed to his being named Eredivisie Rookie of the Month for March 2018.

Coach Pedro Martins kept Tsimikas at Olympiacos for the 2018–19 season. In November 2018, he crossed for Kostas Fortounis’ first goal in a 5–1 defeat of F91 Dudelange in the Europa League group stage; both players were named in the UEFA Europa League Team of the Week. In late 2018, he was mainly left on the bench with Leonardo Koutris given the nod in his position, but the Olympiacos management is known to have huge faith in Tsimikas. As a result, the 22-year old was offered a new deal, with Tsimikas agreeing to sign the contract which would have kept him at the club until the summer of 2023.

On 11 August 2020, Tsimikas signed for Liverpool on a long-term deal for a reported fee of £11.75m. He became just the second Greek footballer to become a Liverpool player after Sotiris Kyrgiakos who joined the club from AEK Athens in 2009. He made his debut for Liverpool in the EFL Cup on 24 September 2020, against Lincoln City in a 7–2 win.