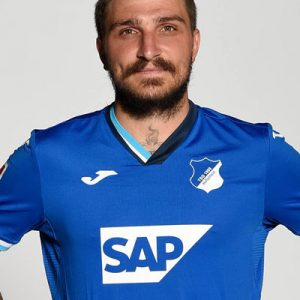 Konstantinos “Kostas” Stafylidis (born 2 December 1993) is a Greek professional footballer who plays as a left-back for German club 1899 Hoffenheim and the Greece national team.

On 15 May 2019, Stafylidis will remain in the Bundesliga through 2023 after signing a contract with 1899 Hoffenheim on a free transfer. Stafylidis spent the last four seasons with Augsburg, with a loan spell at Stoke City, and recorded 61 appearances, five goals, and three assists across all competitions. He is expected to take the place of Nico Schulz, who will likely make a move to Borussia Dortmund this summer. On 18 January 2020, he scored his first goal with the club with a kick in a 2–1 home loss against Eintracht Frankfurt. On 6 September 2020 he faced a shoulder injury that will keep him away of the squad for at least six months. On 23 February 2021, after a very difficult period for the defender marred by injury (167 days to be exact), he injured himself without any outside interference while training. A thorough examination has revealed that the Greek defender has suffered a fracture of the tibial plateau and will be out for several weeks.