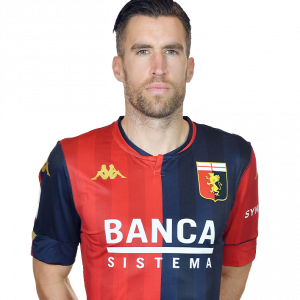 Kevin Johannes Willem Strootman (born 13 February 1990) is a Dutch professional footballer who plays as a midfielder for Serie A club Genoa, on loan from Marseille, and the Netherlands national team.

Sparta Rotterdam
Born in Ridderkerk, Strootman began his career with Sparta Rotterdam, making his professional debut during the 2007–08 season.He signed a contract extension with the club in November 2008. After they were relegated at the end of the 2009–10 Eredivisie season, he played with Sparta in the Eerste Divisie.

Utrecht
In the January transfer window of 2011, Strootman was signed by FC Utrecht. He played with Utrecht in the second half of the 2010–11 season, before moving to PSV in June 2011.

Strootman was joined at PSV with fellow Utrecht recruit Dries Mertens. Strootman made his PSV debut in a 3–1 home win against AZ. He made 88 total appearances for the Eindhoven club.

Roma
On 16 July 2013, PSV and Roma finalized a deal for Strootman’s transfer to the Italian side, in a deal worth €17 million, with the fee potentially rising to €19 million through add-ons. He was given the number 6 shirt.

Marseille
On 28 August 2018, Olympique de Marseille agreed with A.S. Roma on a €25 million (plus €3 million of bonus) transfer fee and signed Strootman on a five-year contract. AS Roma published a thank you and confirmation of the transfer on their website. Strootman mentioned the club’s history, ambitions as well as his close relationship with coach Rudi Garcia as motivating factors to join the club.

Loan to Genoa
On January 12, 2021, Strootman was loaned to Serie A club Genoa until the end of the season.