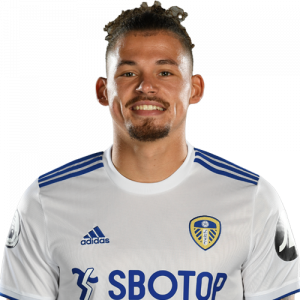 Kalvin Mark Phillips (born 2 December 1995) is an English professional footballer who plays for Premier League club Leeds United and the England national team. He plays mainly as a defensive midfielder and deep-lying playmaker but can also play as a centre-back.

Phillips was born in Leeds, West Yorkshire. He attended The Farnley Academy during secondary school years.

Phillips playing for Leeds United in 2015
Phillips played for local club Wortley from 2003 to 2010 before joining Leeds United’s academy aged 14. He progressed through the club’s youth ranks and signed his first professional deal with the club in the summer of 2014, retaining him for the 2014–15 season.

During the 2014–15 season, Phillips became the captain of the development and under-18 teams. Phillips joined the first team for the trip to Sunderland in the FA Cup third round on 4 January 2015; he was unused substitute in a 1–0 defeat. On 30 March 2015, Leeds Academy coach Jason Blunt revealed that he felt the form of Phillips for the under-18 and development tems would see Phillips become a future first team fans favourite. Phillips made further appearances on the bench for the first team in league matches over the following months before making his professional debut against Wolverhampton Wanderers in 4–3 defeat on 6 April 2015. Along with Sam Byram, Charlie Taylor, Alex Mowatt and Lewis Cook, Phillips was the latest graduate of a promising group of academy players to regularly feature under former youth manager Neil Redfearn in the 2014–15 season. On 11 April 2015, Phillips retained his position in the Leeds starting 11, making his home debut against Cardiff City at Elland Road. Phillips marked the match with his first senior goal in only his second appearance, although the match finished in a 2–1 defeat to Cardiff. At the end of the season, he was offered and accepted a new two-year contract.

On 31 July 2015, Phillips was given the number 27 shirt for the upcoming 2015–16 season. However, with Redfearn replaced as head coach during the summer, Phillips made just 10 league appearances over the course of the season under head coaches Uwe Rösler and then Steve Evans.

2016–2019
In June 2016, only days after the appointment of new head coach Garry Monk, Phillips was offered a new three-year contract at Leeds. On 23 June, Phillips signed the new 3-year contract extension to stay at the club until the summer of 2019. On 27 August 2016, Phillips scored his first goal of the 2016–17 season, with a long-range free kick against Nottingham Forest in a 3–1 defeat. After an injury to captain Liam Bridcutt in September 2016, Phillips, alongside Eunan O’Kane or Ronaldo Vieira, established himself as an important player in Leeds’ central midfield. Phillips’ impressive form for Leeds saw him win the Championship Young Player of the Month Award for October 2016. On 9 December 2016, Phillips was given his first professional red card after giving away a penalty in a 2–0 defeat against then league leaders Brighton & Hove Albion by turning away a goal-bound shot with his arm, the penalty was converted by Glenn Murray.

On 6 August 2017, the opening day of the 2017–18 Championship season, Phillips scored a brace to ensure Leeds beat Bolton Wanderers 3–2. On 9 September he scored his third goal of the season in the match against Burton Albion. His fifth of the season came on 27 October in a 2–1 defeat in the Yorkshire derby against Sheffield United. He started the season partnering O’Kane in the centre of Leeds’ midfield, although after a good start to the season, Leeds suffered a lack of form prior to the dismissal of head coach Thomas Christiansen in February 2018. Phillips and O’Kane found themselves in and out the team with Vieira given more opportunities and the arrival of Adam Forshaw in January 2018. Phillips ended the season with seven goals and three assists, which represented the best scoring season of his career so far.

On 19 July 2018, Phillips revealed he had been training as a centre-back and a deep-lying playmaker ahead of the 2018–19 season, as part of new head coach Marcelo Bielsa’s tactics. As the season started, he was deployed as the holding midfielder in a 4–1–4–1 formation. Phillips was utilised as a deep-lying defensive midfielder for Leeds under Bielsa, Phillps also would play as a centre-back if Leeds’ lined up in a three-man defence. In October 2018, his impressive form in his new position’s under Bielsa’s management, saw Phillips briefly linked with a possible call up to Gareth Southgate’s England national team. After a knee injury to Captain Liam Cooper on 1 December 2018 in a 1–0 win against Sheffield United, Phillips deputised several matches playing as an outright centre-back until Cooper’s return in mid-January. After returning to his defensive midfielder position, he scored his first goal of the season in Leeds’ 1–1 draw against Middlesbrough on 9 February 2019, with Phillips scoring the equaliser in the 11th minute of injury time. In March 2019, he was selected to the 2018–19 Championship EFL Team of the Season. On 4 May 2019, Phillips was named the Yorkshire Evening Post Player of the Year for the 2018–19 season. During the 2018–19 season, Phillips made 46 appearances in all competitions, scoring 1 goal, after Leeds finished the regular season in third place. Leeds qualified for the play-offs, and Phillips started the fixtures against sixth-placed Derby County. Despite Leeds taking a 1–0 win away into the home leg, Leeds lost 4–2 in the second leg, with Leeds down to 10 men after the red card of Gaetano Berardi, and saw Derby progress to the final against Aston Villa 4–3 on aggregate.

2019–present
In July 2019, Leeds opened contract talks with Phillips over a new contract. On 8 August 2019, it was revealed that Leeds had rejected bids for Phillips during the 2019 transfer window in order to keep him at the club, with bids for Phillips rejected at around £27 million. In September 2019, he signed a new five-year contract with Leeds. On Leeds United’s centenary week, Phillips scored the winning goal against Birmingham City, with the match finishing 1–0 which took place in front of another large crowd at Elland Road. In November 2019, Phillips’ Leeds form in defensive midfield under Marcelo Bielsa saw calls for him to be called up to the England squad. England manager Gareth Southgate watched Phillips in January 2020 ahead of a possible call up. After the English football season was paused in March 2020 due to the impact of the COVID-19 pandemic, the season was resumed during June. Phillips would go on to score a direct free-kick in Leeds’ 3–1 win over Blackburn Rovers on 4 July 2020, however his season would be ended just a week later following a knee injury picked up in the 1–0 win over Swansea City. Despite this, Leeds would shortly go on to be promoted to the Premier League as champions when a 1–0 victory over Barnsley was followed by both West Bromwich Albion and Brentford losing their matches. On 7 August, he was named in The Guardian’s Championship Team of the Season for 2019–20. On 8 September 2020, Phillips was named in the Professional Footballers’ Association’s 2019–20 Championship Team of the Season.

On 12 September 2020, Phillips made his first appearance in the Premier League in the opening game of the season in the 4–3 defeat against reigning Premier League champions Liverpool at Anfield, with Phillips gaining an assist for Jack Harrison’s goal.

On 8 February 2021, Phillips made his 200th appearance for Leeds in a 2–0 win over Crystal Palace, joining a select group of just under 70 players that have made over 200 appearances for the club, including current teammates Stuart Dallas and Liam Cooper who also hit the milestone this season.