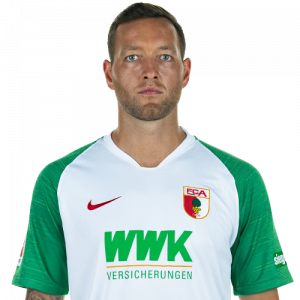 Julian Schieber (born 13 February 1989) is a German footballer who plays as a striker for the German Bundesliga club FC Augsburg.
VfB Stuttgart
Schieber made his Bundesliga debut in a match at Energie Cottbus on 6 December 2008. On 21 January 2009, he extended his contract at VfB Stuttgart until the summer of 2011.

In February 2009, Schieber played his first international (UEFA Cup) match for Stuttgart against FC Zenit St. Petersburg. On 15 August 2009, he scored his first Bundesliga goal in the Baden-Württemberg derby against SC Freiburg (final score 4–2). He also scored twice on 26 September 2009 in a match in Frankfurt am Main against Eintracht Frankfurt (final score 3–0).

In July 2010, Schieber was loaned out to 1. FC Nürnberg until the end of the season.

On 13 December, he scored the only goal of the game in a victory over his former club Dortmund, which pushed them into a relegation play-off place.