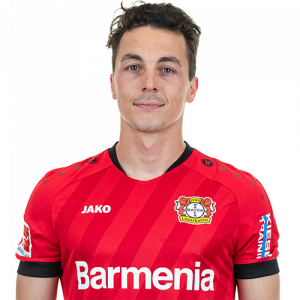 Julian Jakob Baumgartlinger (born 2 January 1988) is an Austrian professional footballer who plays as a midfielder for Bayer Leverkusen and the captains the Austria national team.

Growing up in the Austrian market town of Mattsee, Baumgartlinger began playing football at local USC Mattsee at age five. In 2001, he left Austria to join the renowned youth academy of 1860 Munich. There he ran through all the youth teams and eventually was called to their first team in 2007. After having played 13 times, mostly as substitute, in the 2007–08 and 2008–09 seasons, he accepted a call from Austrian club Austria Wien to return to his homeland after eight years.

In Vienna, Baumgartlinger spent two successful years, becoming a regular for his club as well as for the Austria national team. This attracted the attention of Bundesliga team Mainz 05, which acquired his services for a transfer fee estimated at €1.1 million. On 19 May 2016, it was announced Baumgartlinger had signed a four-year contract with Bayer Leverkusen.