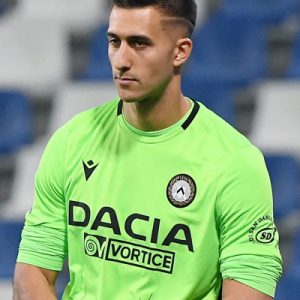 Juan Agustín Musso (born 6 May 1994) is an Argentine professional footballer who plays as a goalkeeper for Serie A club Udinese and the Argentina national team.

Club career
Musso trained at the academy of Club de Regatas San Nicolas, before going on loan to Defensores de Belgrano de Villa Ramallo, with which he won the local championship at the age of 16. In the final, he saved three out of five penalties in the shoot-out.

In 2014 he had an excellent year as Racing won the Argentine Primera División for the first time in 13 years.

In the summer of 2018 he was signed by Serie A side Udinese. Throughout the season, Musso established himself as the undisputed starter and became one of the team’s key players.

International career
Musso was born in Argentina and is of Italian descent, and holds both passports. He was part of the Argentina Under-20 squad for the friendly tournament Four Nations match at La Serena, Chile in preparation for the 2013 South American Youth Football Championship.

He made his debut for the Argentina national football team on 26 March 2019 in a friendly against Morocco, as a 67th-minute substitute for Esteban Andrada. On 14 June 2019, he received a late call-up for the 2019 Copa América to replace the injured Andrada.