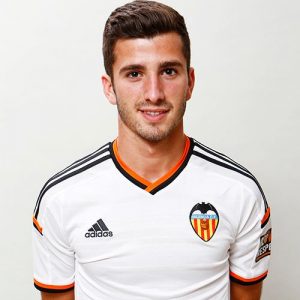 José Luis Gayà Peña (born 25 May 1995) is a Spanish professional footballer who plays as a left-back for La Liga club Valencia and the Spain national team.

An academy graduate of Valencia, he made his senior debut in 2012 and went on to play in more than 250 competitive matches for the club.

Gayà appeared in his first full match with the Spanish senior team in 2018, featuring for the side at UEFA Euro 2020.

Born in Pedreguer, Alicante, Valencian Community, Gayà was a product of Valencia CF’s youth system, where he started playing as a striker – scoring over 60 goals in one year – before switching to left back. He made his senior debut with the reserves at not yet 17, playing 21 minutes in a 1–0 away win against Andorra CF for the Segunda División B in what would be his only appearance of the season.

On 30 October 2012, Gayà appeared in his first official game with the main squad, playing the full 90 minutes in a 2–0 away victory over UE Llagostera in the round of 32 of the Copa del Rey. He made his first appearance in the UEFA Europa League on 12 December of the following year, in a 1–1 group stage home draw with FC Kuban Krasnodar.

Gayà played his first game in La Liga with the Che on 27 April 2014, starting and featuring the full 90 minutes in a 0–1 home loss against eventual champions Atlético Madrid. On 3 August, he scored the first goal in a 3–1 defeat of S.L. Benfica in that year’s Emirates Cup.

Gayà was made a starter by new manager Nuno Espírito Santo in the 2014–15 campaign. He scored his first goal as a professional and in the Spanish top flight on 25 September 2014, grabbing his team’s second in a 3–0 home victory against Córdoba CF. His second came in the domestic cup on 7 January of the following year, helping to a 2–1 win over RCD Espanyol also at the Mestalla Stadium.

On 8 May 2015, Gayà renewed his contract with the club, signing until 2020 with a €50 million buyout clause. In May 2018, he agreed to a further extension until 2023 with his release clause increasing to €100 million. That October, having been part of the side that kept a clean sheet against Manchester United in the group stage of the UEFA Champions League, ESPN FC put him into their Champions League Best XI.

In March 2020, Gayà and teammates Ezequiel Garay and Eliaquim Mangala tested positive for COVID-19 virus during the coronavirus pandemic in Spain. That August, due to the economic effects of the pandemic, the entire squad was put up for sale except him. Having previously filled in as captain in the absence of Dani Parejo, he took the role permanently as the midfielder was shipped to Villarreal CF.