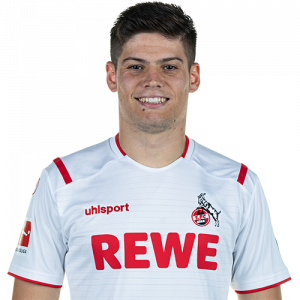 Sporting Gijón
Born in Oviedo, Asturias, Meré joined Sporting de Gijón’s youth setup in 2010 after starting out at neighbours Real Oviedo, and he made his senior debut with the reserves in the 2013–14 season (aged only 16), in Segunda División B. On 24 July 2014, he signed a new five-year deal with the club, with a €25 million release clause.

In January 2015, Meré was linked to Newcastle United, but nothing came of it. On 11 April, he played his first game as a professional, starting in a 1–1 away draw against Real Zaragoza for the Segunda División.

Meré appeared in five matches for the first team during the campaign, as they returned to La Liga after a three-year absence. He made his debut in the competition on 23 September 2015, starting in a 1–2 away loss to Rayo Vallecano.

1. FC Köln
On 20 July 2017, Meré joined 1. FC Köln on a five-year contract for a fee believed to be between €8.5 million and €9 million, becoming the highest transfer ever received by Sporting. His first game in the Bundesliga took place on 9 September, when he played the second half of a 0–3 away loss against FC Augsburg.

Meré scored his first goal as a professional on 2 February 2018, but in a 2–3 home defeat to Borussia Dortmund.