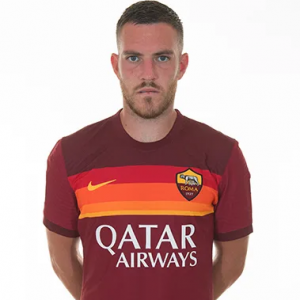 Jordan Marcel Gilbert Veretout (born 1 March 1993) is a French professional footballer who plays as a midfielder for Serie A club Roma.

He is a former France youth international, having represented his nation regularly at under-18, under-19, under-20 and under-21 level. In 2013, he won the FIFA U-20 World Cup.

Nantes
Veretout made his professional debut for French club Nantes on 13 May 2011 in a league match against Sedan. He made his first start the following season in the team’s opening match of the campaign; a 1–0 extra time win over Reims in the Coupe de la Ligue. Veretout made 146 appearances for Nantes over five years.

Aston Villa
On 31 July 2015, Veretout joined Birmingham-based Premier League club Aston Villa on a five-year deal for an undisclosed fee, believed to be in the region of £7 million. Manager Tim Sherwood praised the player, saying, “I know Veretout is very highly rated over in France.” Veretout made his first official appearance for Aston Villa in a 1–0 victory against A.F.C. Bournemouth on 8 August 2015.

Loan to Saint-Étienne
On 23 August 2016, Veretout joined AS Saint-Étienne on loan for one year without an option to buy from Aston Villa.

Fiorentina
On 25 July 2017, Veretout moved to Fiorentina agreeing to a four-year deal with the option of a fifth year. The transfer fee paid to Aston Villa was reported as €7 million.

Roma
On 20 July 2019, Veretout joined Roma on loan with an obligation to buy. On 1 July 2020, Veretout joined on a permanent basis for an initial fee of €16 million, potentially rising to €18 million. He signed a four-year contract.

On 28 February 2021, Veretout scored his 10th Serie A goal of the 2020–21 season, in a match against Milan. Veretout became the first French midfielder to reach that milestone since Michel Platini for Juventus in 1985–86.