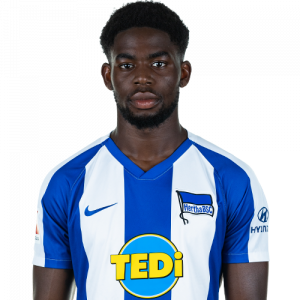 Jordan Torunarigha (born 7 August 1997) is a German professional footballer who plays as a defender for Hertha BSC. He is the son of former footballer Ojokojo Torunarigha and the brother of current footballer Junior Torunarigha.

Club career
Born in Chemnitz, Torunarigha joined Hertha BSC as a child in 2006 and signed his first professional contract on 19 December 2016. He played as a striker before Hertha’s U-15 coach Ante Čović had the idea to make him switch into a defender. He made his debut for the first team on 4 February 2017, coming on as a 90th-minute substitute in a 1–0 win over FC Ingolstadt. He made his first start for the Hertha on 5 April 2017 against Borussia Mönchengladbach, starting at left back following illness to Marvin Plattenhardt and suspension for Maximilian Mittelstädt. He scored his first goal for the club in a 2–0 win over Darmstadt 98 on 13 May 2017, sending Hertha up to 5th in the table with one match remaining.