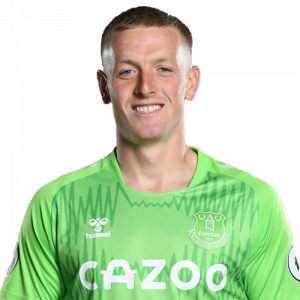 Jordan Lee Pickford (born 7 March 1994) is an English professional footballer who plays as a goalkeeper for Premier League club Everton and the England national team.

Pickford has previously played for Sunderland’s academy, reserve, and senior teams in addition to loan spells at Darlington, Alfreton Town, Burton Albion, Carlisle United, Bradford City and Preston North End. He signed for Everton for a fee of £25 million in June 2017.

Pickford has represented England at under-16, under-17, under-18, under-19, under-20 and under-21 levels. He received his first call-up from the full England national team for the 2018 World Cup qualifier against Slovenia in October 2016, making his debut in November 2017 in a friendly against Germany. He was the starting goalkeeper in England’s 2018 World Cup fourth-place finish, leading the squad to its first semi-final appearance since 1990 with a penalty shootout victory in the second round and a clean sheet in the quarter-final.

Pickford again continued to be Everton’s first choice goalkeeper, being part of the team that won its opening four games for the first time since the 1969–70 season.

In the first Merseyside derby of the season, Pickford was criticised for his tackle on Liverpool defender Virgil van Dijk which resulted in Van Dijk being substituted after six minutes, with what later turned out to be a season-ending ACL injury. The derby was one of the most heated in recent years, with Richarlison being sent off for a late challenge on Thiago Alcantara and captain Jordan Henderson having a game-winning goal ruled out for offside by VAR.