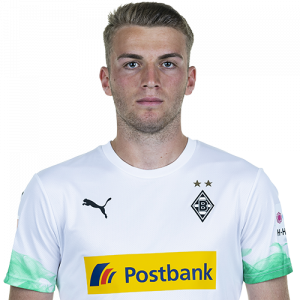 Louis Jordan Beyer (born 19 May 2000) is a German professional footballer who plays as a defender for Borussia Mönchengladbach. He has represented Germany at U16 through U21 youth levels.

Beyer started his career at hometown club DJK-SV Thomasstadt Kempen. As a player of the under-13 side he moved to the youth academy of Fortuna Düsseldorf in 2012. For the 2015–16 season, he joined the under-16 team of Borussia Mönchengladbach. In the 2016–17 season he advanced to the under-17s, with whom he played in the Under 17 Bundesliga. For the 2017–18 season, Beyer moved up to the under-19s, for whom he had already made an appearance in the Under 19 Bundesliga in the pre-season.

For the 2018–19 season, Beyer was promoted to the first team under head coach Dieter Hecking. Under Hecking, he made his professional debut in the first round of the DFB-Pokal. In September 2018, Beyer signed his first professional contract, keeping him at the club until June 2022. Over the entire season, Beyer completed nine appearances in the Bundesliga, during which he was in the starting lineup eight times. In addition, he made four appearances for the second team in the fourth-tier Regionalliga West as well as once in the Under 19 Bundesliga.

During the first half of the 2019–20 season, under new head coach Marco Rose, Beyer made three appearances in the Bundesliga; all as a substitute. In addition, he appeared four times for the second team in the Regionalliga. On 14 January 2020, Beyer joined Hamburger SV on loan in the 2. Bundesliga, reuniting him with Hecking who had become head coach there. Before the season was suspended in March due to the COVID-19 pandemic, Beyer had made seven appearances in the starting lineup. As the season was continued in mid-May, Josha Vagnoman, who Beyer had been brought in to replace due to a long-term injury, returned to the right-back position. This meant that Beyer moved to the centre back position alongside Timo Letschert. Beyer, however, soon lost his starting position to Rick van Drongelen after recording a weak performance, and was benched as a consequence. After that, Beyer only made sporadic appearances for HSV. In total, he played 11 times for HSV, who missed the promotion after ending in 4th place. With his loan deal ending, Beyer returned to Mönchengladbach after the season.