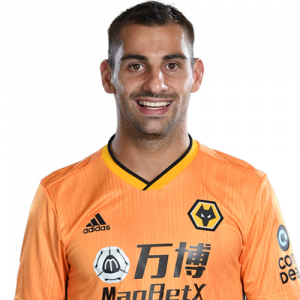 Jonathan Castro Otto (born 3 March 1994), commonly known as Jonny, is a Spanish professional footballer who plays for Premier League club Wolverhampton Wanderers and the Spain national team as a right or left back.

He began his career with Celta, making his debut with the first team at the age of 18 and going on to appear in 221 matches across all competitions. In 2018 he signed with Wolverhampton Wanderers, initially on loan.

Jonny made his senior debut for Spain in 2018.

On 25 July 2018, Jonny joined Atlético Madrid for an undisclosed fee, signing a six-year contract. He then immediately joined English club Wolverhampton Wanderers on a season-long loan. His maiden appearance in the Premier League took place on 11 August, when he played the entire 2–2 home draw against Everton.

Jonny scored his first league goal on 29 September 2018, in a 2–0 home win over Southampton. On 18 November, he suffered a knee ligament injury while playing for Spain, being initially sidelined until the end of the year but recovering a few weeks later.

Having been a regular first-team player during the first half of the campaign, Jonny agreed to a permanent four-and-a-half-year deal at Molineux on 31 January 2019 for an undisclosed fee, reported to be £15 million. In August 2020, during a Europa League tie against Olympiacos FC, he suffered an anterior cruciate ligament injury that sidelined him for six months.

Jonny returned to action on 7 February 2021, playing the first half of the 0–0 league draw against Leicester City. He signed a new contract shortly after, until 2025.